About our School's Namesake 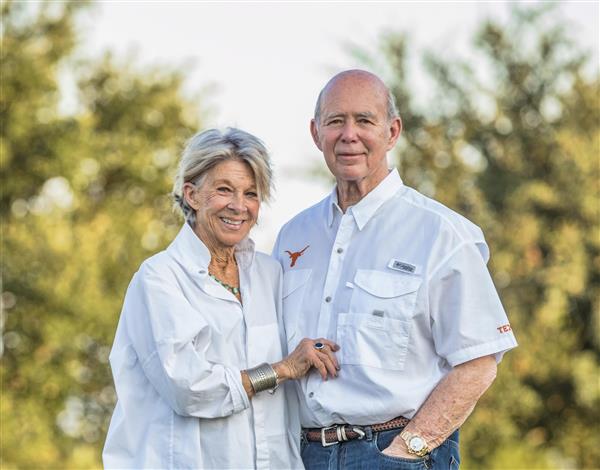 Michael (Mike) W. Reeves and Janie Glover Reeves were lifelong Texas residents and high school sweethearts in Childress, Texas. Mike was born on January 19, 1947 to LeRoy and Charlene Reeves, and Janie was born on October 10, 1946 to John E Glover and B. Victoria Gephart Glover.

Mike attended the University of Texas at Austin on a football scholarship graduating in 1969 with a BBA. He was involved in the Sigma Alpha Epsilon fraternity while at UT. Janie attended North Texas State University and UT Austin where she received her BS in Elementary Education in 1969.

While at UT, the couple were married on August 31, 1968. Together they have a daughter, Courtney Reeves Buckaloo, a Prosper 1992 graduate, and a son, Cameron Reeves, a 1996 Prosper graduate. The couple has three grandchildren, Granddaughter- Taylor Buckaloo, Grandson- Alston Buckaloo, and Granddaughter- Landrie Buckaloo

Mike started his 40 year career with New York Life as an Agent in Austin in 1970 quickly moving into management and moving to Dallas as the Managing Partner. Mike was later promoted to Senior Vice President and was in the position until he retired in 2006. After retirement he continued with the company doing some consulting for New York Life. Janie taught at Meridell Achievement Center working with emotionally disturbed children from 1970-1974. They moved to Prosper in 1983.

Both were active in the Prosper community and Prosper ISD. Mike served on the PISD School Board and Janie served on the Prosper PTO Board for 10 years. He served as the Chair of the Tom Landry FCA Open for many years and was on the Board of Mane Gait. Mike was a founding member of the Prosper Open Foundation, now known as the Prosper Educational Foundation, which was started with other district fathers to benefit Prosper boys and girls golf and tennis teams. Meanwhile, Janie served in the Prosper library and volunteered extensively in the concession stands at every sporting event. The service of the couple contributed extensively to the growth and development of Prosper and Prosper ISD.